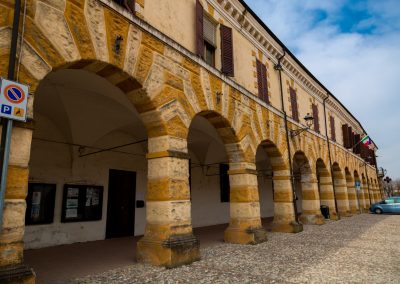 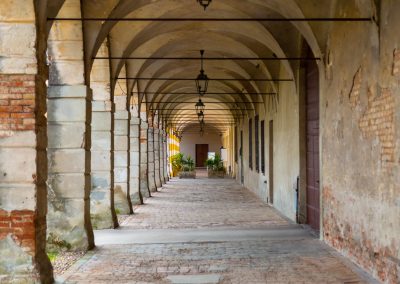 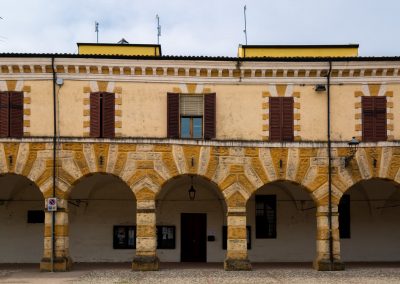 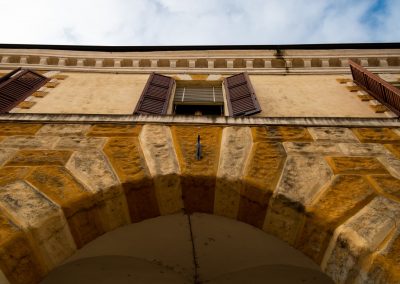 The Town Hall has been used over the centuries for the most varied purposes, but always mainly for public functions. A portion currently occupied by the primary school once housed the Oratory of Saint Jerome (a.k.a. Oratory of the Penance), which belonged to the lay brotherhood of the Disciplini (Disciplinants).
What is more striking about this Palace are the majestic Gonzaga arcades, which testifies to the magnificence of the lords of Mantua. They are likely to date back to the period between the late 16th and the early 17th centuries, and represent the oldest part of the whole arcaded square, whose ribbed vaults have been preserved to date.
In the 2000s the façade of the Palace was renovated and restored to its original colours. The flooring is made of terracotta tiles. The rest of the square, as it appears in its current version, with a symmetric pattern between the two wings of arcades, dates instead from the first half of the 19th century.
In the 18th and 19th centuries (first half) the porticoed section of the Palace was referred to as “Contrada del Pallone” [“(Foot)Ball Quarter”] and therefore the municipal residence too, by association, became the “Casa del Pallone” [“(Foot)Ball House”]. At that time the game was very different from how we know it today, even if the ball was already made up of a sphere of cowhide swollen with air. Widespread during the Renaissance in aristocratic circles, in the 18th century it became a bourgeois pastime, which later on would move to the squares.